Sighisoara: At the origins of Dracula’s legend.

The dominant Mountain Church is one of the landmarks in Sighisoara where back in 1431 was born Vlad Tepes, later ruler of Valachia and literary model of Bram Stoker’s “Dracula”.

Picturesque monument of a major old German settlement in Transylvania.

It is the second time I am in Sighisoara after 1981. I was a student then, and together with another fellow student we made a stopover here on a hitch-hiking tour through Transylvania.

I just remember that the local priest allowed us to put our tent inside the Mountain Church courtyard and that next morning we were woken up by loud organ music coming from inside the church. We craned our heads out of the tent and saw young folks walking by on their way to the nearby German school. The ethnic German kids called us “Deutschländer” – Germans from Germany. And they did it with their typical archaic dialect.

The camera I used here was a compact 24 mm fixed-lens Leica X1.

34 years later there are no more ethnic Germans in the town, the kids standing at the school door are speaking Romanian and all souvenir shops are crammed with kitschy Dracula crap.

I am caught by a weird atmosphere at this grey November morning amidst the emptiness of an amazingly nice historical center with shop keepers just opening their shops and occasional people talking to each another at the neighborhood corners.

Though visible efforts are being undertaken to maintain this jewel of medieval architecture, it is its crumbling beautifulness that makes the place unique and authentic to me. 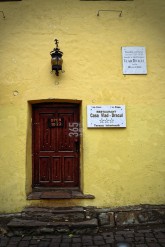 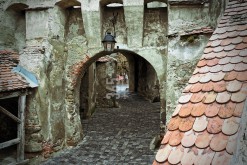 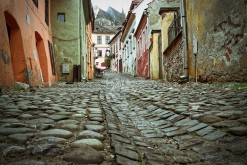